«Switzerland, the kingdom of art brut»

I am going to the psychiatric clinic of UPD Waldau along Adolf Wölfli street. Wölfli is one of the most famous art brut artists in the world and the most famous Swiss art brut artist in Switzerland. I find it amazing that in such a conservative country a street was named after the outsider artist; a "madman", „freak”, psychiatric clinic patient. He spent his almost entire adult life there, producing 25,000 pages of visual, visual-textual and musical works. After his death, his paintings were included in the collection of Jean Dubuffet, the most famous art brut collector. There were also myriads of exhibitions, which were loved not only by Europe, but also by Japan. Well, no surprise. Filled with thousands of details, they are a spectacle you cannot miss. They promise heaven, scare with hell, invite you to share a bizarre, reconstructed world, far from logic and sensual perception. Made mostly with crayons and pencils, they are almost a showcase of art brut.

This time I am going to the Swiss psychiatric clinic UPD Waldau to meet the successors of Wölfli. At the clinic (which also has a collection of works by Wölfli and other former patients), a studio for artists after a mental crisis was established over a dozen years ago. It brings together a dozen or so members, often former hospital patients, who have found their soul, meaning and vocation back in their visual creativity. They are usually self-taught artists, each of whom has their own unique style. Some work on one painting for weeks, others finish it in a few hours. Each person's story could become material for a book. The atelier organizes exhibitions and puts artists in contact with collectors. Until now, exhibitions took place, among others in Switzerland, France, Germany and Japan. One of the atelier members tells me:

When a mental disorder enters your life, the world ends. You have to start building up, re-creating yourself anew. In my case, art helped. After the first crisis, hospitalization, and the loss of my reference points, my days went empty and I started drawing or painting, everyday, to a drawer at first. After a few years of such craftsmanship, I discovered a local association of outsider art, i.e. artists with an experience of a mental crisis. After a year, I had my first exhibition; meanwhile my drawings appeared on the cover of a mental health magazine - and I sold my first painting, the cover one. Then I started taking part in more exhibitions and selling more and more works. I also met many people whose mental crisis triggered the artist's soul and regular artistic activity. They are people who experience a mental crisis, for whom creation becomes the essence of life, helps to cope with difficulties and define who they are. Sometimes one of us stops coming to the joint atelier and we know then that the crisis has returned for some time. But we also know that this artist will eventually come back to us. Each of us has a separate, unique style, in line with art brut or outsider art. In the atelier, we are always accompanied by a healthy caregiver with whom you can talk about both art and life. The entire association also counts many healthy volunteers who not only help us promote and exhibit our works, establishing contacts with cultural institutions and collectors, but also sell them. For the first time in my life, I had an exhibition in a real museum in 2020. Were it not for this network of healthy helpers, we, people with mental disorders, would not be able to organize support and promotion on such a scale. Our condition is too labile and unpredictable. We need healthy people.

I decided to select three artists and their three works to be featured in this article.
The first is Jonas Scheidegger, coming from an artistic family, an internationally recognized art brut artist (over 2,500 works - paintings, drawings, sculptures) after a mental crisis. His hallmark is details, like in Wölfli’s works. He devotes a lot of time to them and they give his portraits a slightly comic-book look. Details in Scheidegger's paintings are most often dots or squares, diamonds and other small elements. Thanks to them, the characters in his paintings look like they are covered with snake scales, and they cannot be confused with other works. Each character seems to be filled to the brim with them. However, unlike Wölfli's work, Scheidegger's background is often, at least partially, undeveloped. The colors, on the other hand, are much more vivid and intense than in Wölfli's paintings; Scheidegger preferably works with acrylics. The figure sparkles, shines, is like an exclamation mark against a dark background. There are also no references to religiosity, heaven and hell, so frequent in art brut. We look at the woman in a bikini - and we just wonder what party she is going to or coming back from.

The second artist I chose is Madeleine Mollet. Her art ranks between art brut and art naif, being an unusual, fairy-tale, unreal show. Looking at Mollet's paintings, we wonder if we have found ourselves in the land of elves and fairies. Much softer brush strokes than Scheidegger's, softer tones and colors, pastel, developed background; it is no longer a comic portrait of a party girl, but a gentle face of a goddess. At the same time, elements so characteristic of art brut - lots of details (look at the figure's bust or her hair), the picture is fully developed, filled to the brim, and even overflowing from the edges. There is some childish naivety in it, some childish style, some painted promise that "everything will be just all right". Mollet's paintings soothe, calm down, give hope. They seem almost meditative in nature. And, in fact, for many outsider artists art IS meditation – a way to overcome mental disorders, anxiety, fear and uneasiness.

The third art brut artist I would like to introduce is Dorota Solarska. A double outsider, an immigrant in Switzerland and at the same time a former patient of the psychiatric hospital of UPD Waldau. I chose her work "Industrial Serenade". Art brut artists rarely use only black and white colors, yet Solarska chose this method; as she says herself, she values clear rules of the game in her life. The work, however, fits in with the outsider art trend: there are a lot of details, words work together with the image, you can see the characteristic horror of vacuii and the work is filled to the end - the details pour out of the frame, do not fit into them, "stick out". You almost want to see what is beyond the picture; where the road is leading to, what else is in the cloud and what hand is holding a sign with the word "NO". At the same time, the female face is very intriguing as it seems to be the modus operandi of all this “mess” on the image. Industrial serenade resounds with a cacophony of elements and hes a unique, “end of the world” quality.

Art brut or outsider art is my passion and I promise you, dear reader, to bring you fresh news in this field every month. Until next time, 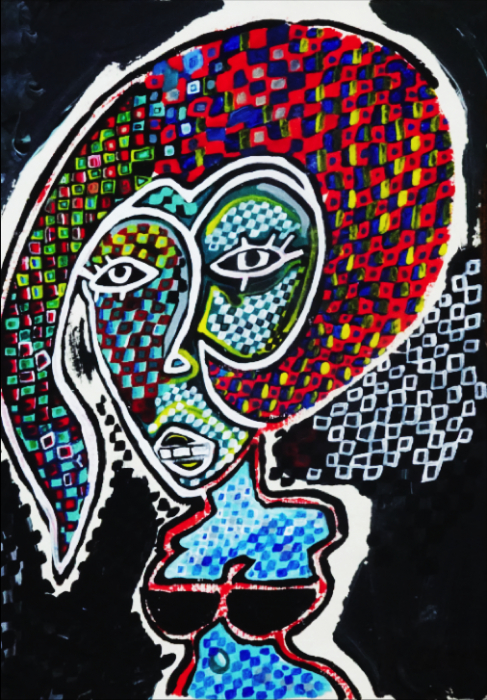 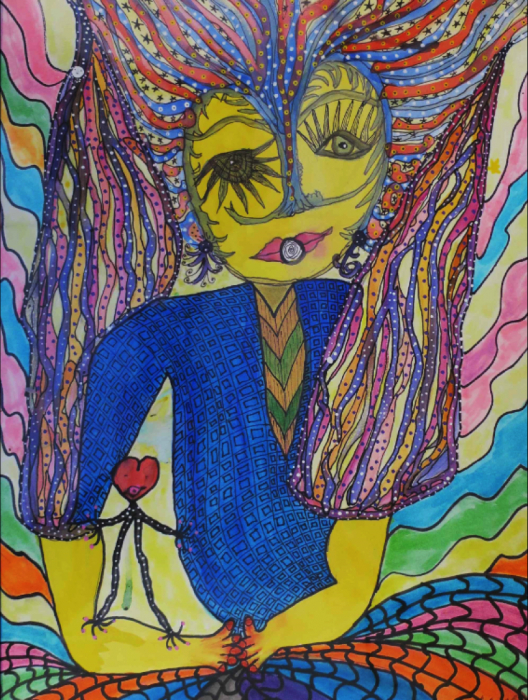 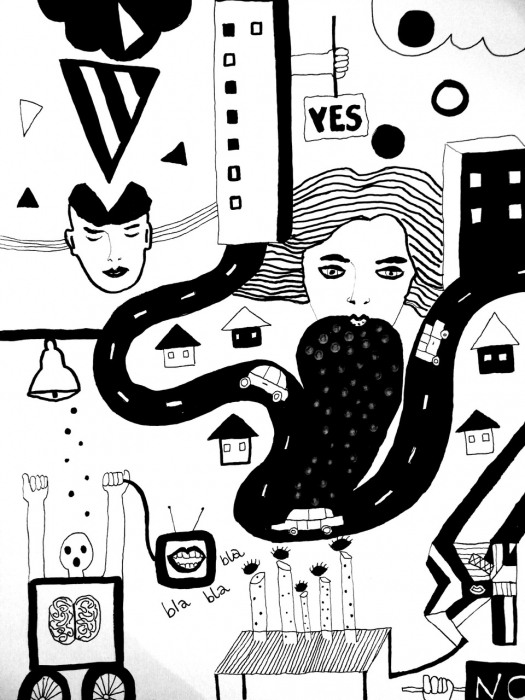